Through a lens darkly (and strongly) 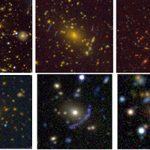 The Dark Energy Survey collected more than 34,000 exposures during its science verification (SV) phase, from November 2012 to February 2013. It also began its first official season of observations on Aug. 31. Among the millions of astronomical objects imaged by DES so far, there are rare instances of “strong lensing” systems, where the effects… END_OF_DOCUMENT_TOKEN_TO_BE_REPLACED